A body of opinion is emerging that “shopper marketing” carries so much baggage that its name must be changed. While a few organizations may see this as worthy idea, it is unlikely that many others will follow suit anytime soon. More than ten years after Shopper first burst on the scene, the function and the job titles that go with it are fairly well entrenched. By now it is clear that Shopper has transcended the realm of trendy marketing buzzwords and is a enduring, if not permanent, feature of org charts almost everywhere.

Even more important, the imperative to understand consumers as shoppers, and integrate brand and retail strategy, is far more critical in today’s always-on era of digital commerce than ever before. The mandate to bring a shopper focus to brand and retail strategy will only grow stronger in the years to come. This is no time to lose focus on the shopper.

Whether the name is likely to be changed is not the same question as whether it should be changed, of course. Shopper is not only misunderstood, but also misused as a catch-all for any and every kind of marketing activity involving retail, online or instore. What began as a sophisticated build on traditional brand strategy, in many cases has been dumbed down and corrupted as a quick fix for sagging sales. It’s easy to see why some think it should be called something else, and that doing so would solve the problem.

It’s also easy to see why doing so probably wouldn’t make a bit of difference. Simply changing the name, without taking any steps to change understanding of its underlying principles, would be the marketing equivalent of rearranging the deck chairs on the Titanic. Would the ship have withstood that iceberg better had it been called the Rose? It’s a question of Shakespearean proportions, and it was answered a very long time ago. It’s more important to change the expectations within the organization, and start putting results up on the board, than to change the name.

If there were to be a name change, it would have to be in combination with a concerted effort to update or otherwise clarify the purpose that gave rise to the concept of integrated brand and retail strategy in the first place. As noted earlier, Shopper was preceded by co-marketing, which was preceded by account-specific marketing. Each time the name changed, there was a rationale for it.

If there is a significant change to the Shopper mandate it would need to be explained, and any new name would have to reflect that change. Right now, it appears that the only problem with Shopper is that it is not being pursued as it was originally intended. It makes more sense to double down on Shopper’s organizing principles, not confuse matters more by changing its name.

The harder question concerns how to re-frame Shopper in a way that makes it relevant to everyone throughout the organization, up to and including the CEO. Interestingly, some report potentially greater support for Shopper among CEOs than CMOs and brand teams. We do not know why this is, but suspect it has something to do with the tribalism and silos that have long afflicted the relationship between brand and retail, marketing and sales. The best CEOs presumably seek to dissolve those barriers and view brand strategy holistically, which would mean integrating brand and retail strategy. 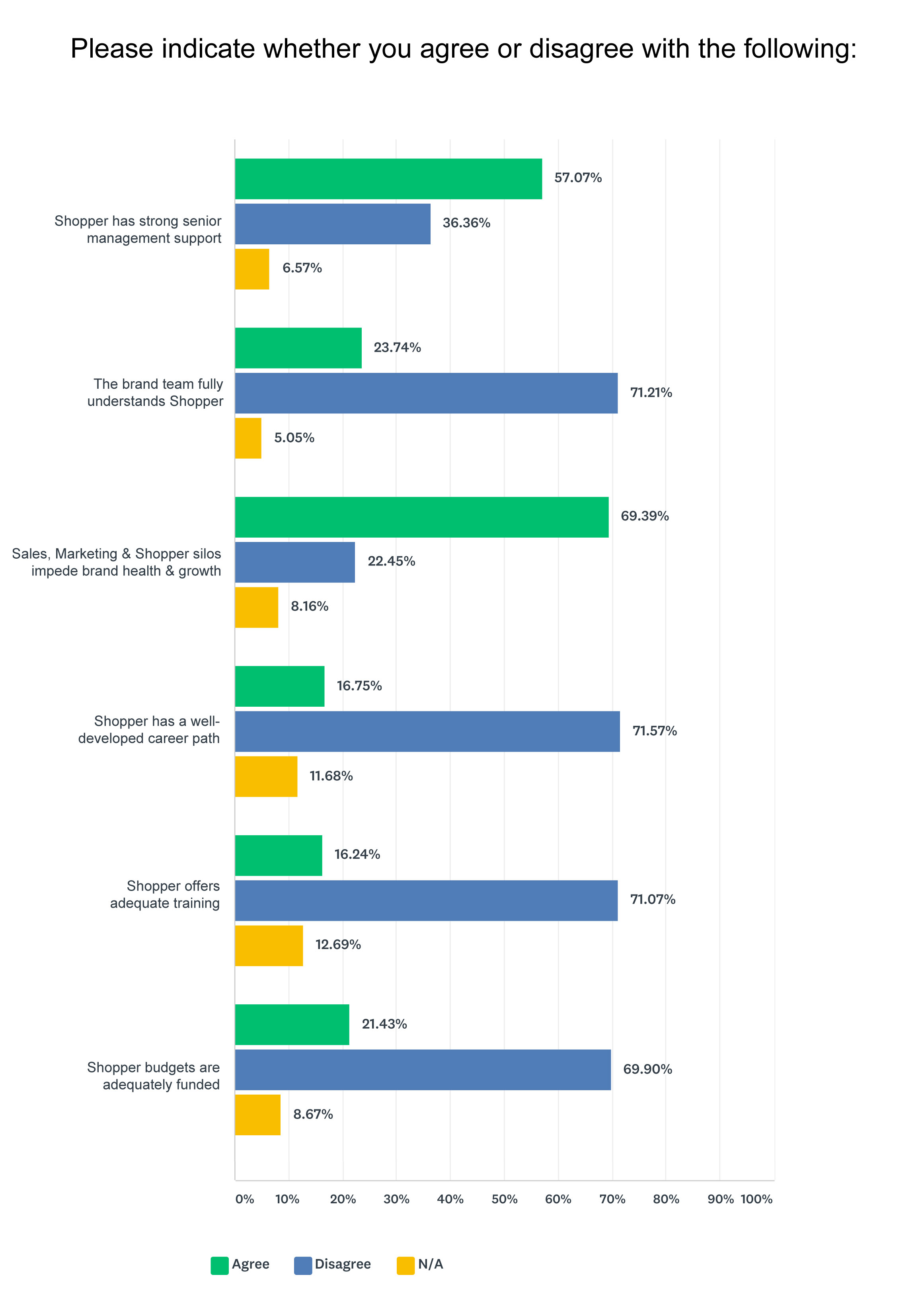 The key would seem to be to find a way to convey to brand teams and CMOs that their success depends on Shopper’s success, that brand health and growth depends on thinking about brand and retail as a single idea. Re-framing Shopper as the keeper of the essential touchpoint of consumer engagement in a shopping context could only help accomplish this. Re-setting Shopper within the blueprint of brand strategy is equally vital. This won’t happen as long as Shopper is thought of as a synonym for promotions or Shopper as a pawn of retailers; it will happen as soon as it is viewed as a platform for commercial innovation, and big, exciting ideas.

Some readers may have noticed a somewhat obsessive practice of separating “shopper” from “marketing” on this page. The thought behind this quirk is partly that “shopper marketing” as suffered because it is viewed as just another in a long series of the kind of hyphen-marketing buzzwords that tend to give rise to the siloed, tactical outlook that impedes holistic thinking, planning, implementation and measurement.

It is also that Shopper, when tended to as originally designed, is less about marketing in the traditional sense, and more of a business concept centered on innovations in the brand and retail experience itself, versus the communication of that experience through advertising, promotion or other means.

Heck, we don’t refer to “advertising” as “advertising marketing.” Just as Advertising is just Advertising, Shopper is just Shopper. In any case, it would be a shame to evict the word “shopper” from our lexicon because it is such an important and powerful word. It is the “shopper” who is the decision maker and the ultimate arbiter of what is consumed and purchased again and again. Shopper captures perfectly the dynamics of the marketplace, meeting and exceeding needs in the moment, in real life. The (small ‘s’) shopper more than deserves the full focus of our time and attention.

“I don’t care what you call it,” Tammy Brumfield says. “It’s important that you do it.”

August 7th: What’s next for Shopper?

July 24th: Is there a cure for marketing mix modeling?